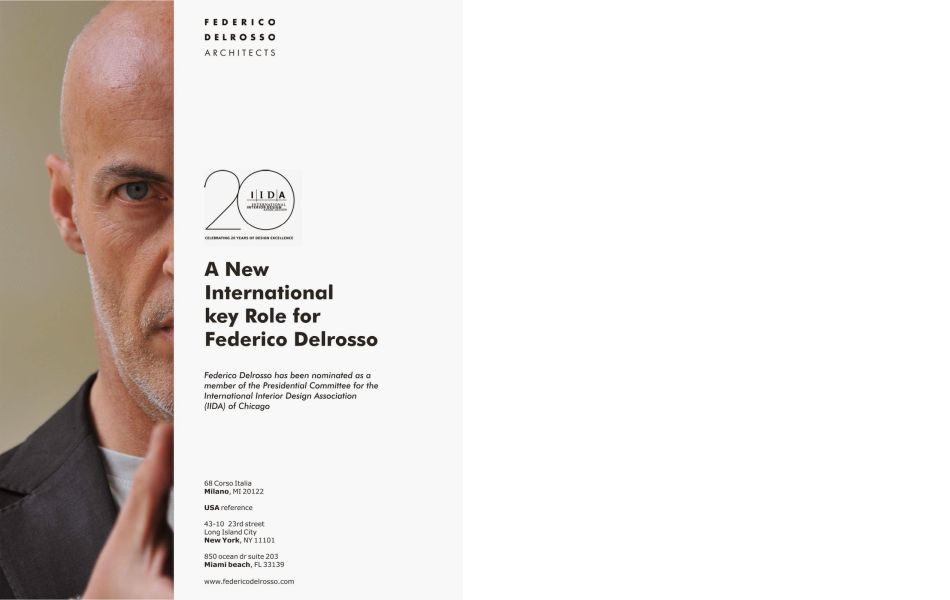 Federico Delrosso has been nominated as a member of the Presidential Committee for the International Interior Design Association (IIDA) of Chicago.

It is a new international challenge for Milanese architect and designer Federico Delrosso and the culmination of his increasingly active presence in the United States, where from 2009 he has been creating projects in the catering sector for the Bice chain, from New York to San Diego. His nomination as a member of the Presidential Committee of IIDA (International Interior Design Association) was made official by the international president Julio Braga during the summer meeting of the Board of Directors held from the 22nd to the 24th August 2014 (http://www.iida.org/content.cfm/press-releases).

“I am honoured by this appointment”, said the established professional, who is already accustomed to recognition abroad. This recognition includes his participation in spring in the Moscow Architecture Biennale, at a conference on Light and Architecture, the Eurasian Prize in Ekaterinburg, for which he was one of the judges, and the ELA fair in Mexico City, for which he designed the Domus Mediterranea installation.  He announced that his “collaboration with IIDA will unfold with the delicate task of creating an outpost of the renowned association in Italy, thus allowing a concrete link to be made between design opportunities and professionals in a network that is already active in 50 countries and has 13,000 members”.

The IIDA, which was founded in Chicago in 1994, organizes its activities with 33 “IIDA Chapter” venues throughout the world, providing networking opportunities, information and training services to safeguard, encourage and develop the excellence of interior design everywhere.

“The IIDA had no doubts about appointing Federico Delrosso as a member of the Presidential Committee to inaugurate the establishment of an Italian chapter in the future”, said Cheryl Durst, Executive Vice President, CEO and LEED Accredited Professional (LEED AP) of the IIDA. “His level of leadership, combined with his passion for design, will be an excellent link to assist the IIDA in developing this initiative and cultivating the importance and influence of the association within the design industry at an international level”.

Now, twenty years after its establishment, the association continues to expand its horizons, together with Federico Delrosso, a known figure in the States thanks to the cover dedicated to him by “Interior Design” magazine in 2011.