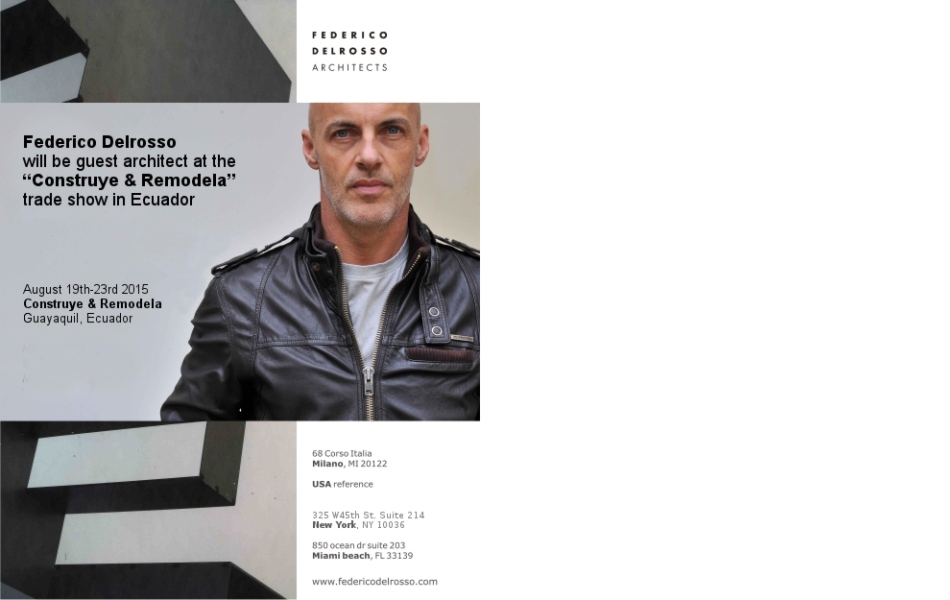 Federico Delrosso will be guest architect at the “Construye & Remodela” trade show in Ecuador.
For the building industry trade show “Construye & Remodela” – held from 19th-23rd August in Guayaquil, Ecuador – architect and designer Federico Delrosso will present his twenty years of work and his reflections on the relationship between light and architecture, beginning with his monograph ‘Spostando il Limite’ (Pushing the Boundaries).

Federico Delrosso is expected in Ecuador at the “Construye & Remodela” fair, in which the 2nd International Congress on Architecture will be held on the theme of “Light and Architecture”. Together with Delrosso, another two leading international figures will be involved in the congress, namely American interior designer Adriana Hoyos and Ecuadorian architect Humberto Plaza.

Within the framework of this event, Federico Delrosso, who is originally from Biella and is now based in Milan and New York,  will address the theme of the interaction between “Light and architecture”, as the basic condition of his design approach, beginning with physical and philosophical considerations of matter as energy and consciousness:  “If matter is energy, light is electromagnetic energy and we too are energy, what we do with architecture is nothing more than try to create a ‘magnetic field’ of energy interactions using spaces and volumes. But energy is also consciousness, which lives on in the memory of what we design. The meaning behind our work is therefore not simply an aesthetic deed for its own sake. Given that we are moving energy around and emotionally affecting people, it becomes an act of great social responsibility“. F.D.